The following article, written by me, is going to analysis the function of film music, how it intensify emotions, parallel then scene, or play against the action of the scene etc..by using Crouching Tigers, Hidden Dragon and Lord of the Rings II and others.

scripts, and dialogues and among which, music is an indispensible

part of it. Music adds life to film, it helps to intensify emotions

when the patagonists are undergoing sad life events, and it adds

realism to the film. Like in many Chinese comedies, the

“Mediation from Thai” classical song is always played as

background music when a family member was sick, cough with

blood and finally passed away. Music and sound also creates

atmosphere and gives out more background information about the

story broad without having to describe too much. Like in

beginning with diminished 5th interval symbolized outcry of the

poor Jewish. And the radio sound and the bombing background

sound depict the time and space without necessary narration. It

touched the deepest heart of the audience, telling that the story is

about death, massacre and the kind motive of the factory owner,

can, is in vain. Many of those are still lost and dead in the hands of

the cruel and inhuman soldiers. To further elaborate the functions

of music and its vital part in film, I am going use Lord of the rings-

the two towers and Crouching tiger, Hidden Dragon as

Music intensifies emotions of the film. It helps the audience to

understand more of the story plot. In Lord of the Rings II, at the

to stay with Aragorn, she was told that Aragorn must die, be he

either killed in a war, or because of immortality. The consequence

would be the same, that in the end, Arwen would be alone. Bearing

the loss of beloved one forever in her. When the word “die” is

uttered by the father, a sorrowful music constitutes by female

wordless voice arises, with no other instrument accompany the

mood is a contract and the scene moved into a cold blue, dark and

grey colors with Aragron the king lying down, dead, Arwen was

sobbing, tears running down her face and watching his corpse as

time went by. The female wordless choir continues like a mass in

church, seems to be morning the physical death and the mental

death of the couples. The solo voice in the background, no

instrument, no accompaniment, nothing, seems to mourn the

solitude, loneliness, helplessness of Arwen’s pity fate which she

has chosen. Music stops when the father finishes speaking.

both in imagination and in reality, decided to leave and go back to

her homeland. When the scene changes to Arwen’s walking

leaving where she used to want to stay, the female background

wordless choir is now accompanied by strings at the bottom,

increases in volume, symbolizing her strong will to leave. Music

the audience to feel what Arwen’s emotion is. Without it, this

scene is hardly touching the hearts of the audience.

“Music speaks louder than words” apart from dialogue, music, an

and reveals the emotion more directly. In the Helm’s Deep battle

between the big army of Uruk- Hai and the Théoden king. People

are frightened. With scene of children and old men’s soldiers and

women’s crying, hugging their kids with frightened faces, the king

decided to flight with the thousands orcs from Saruman, the white

wizard. With this scene, background music is of composed by

frightened, and even death. As the music goes, the camera then

who he was, and Gamling said that his men will follow the king to

whatever end. The king knows very clear that with his old, weak,

small number army, around three hundred, there would be no way

to win over the large and fierce enemy monsters out there. The

music background continues from the already discomfort and dark

voiceless medieval choir singing like a mess or requiem, telling the

against the enemy, although this is a suicidal decision.

Music provides coherence to the whole movie. One of the main

themes in Lord of the Ring is the friendship and partnership

between Sam and Mr. Frodo. When the two were climbing up the

stones at the beginning of the scene, the two lost the ways. They

decided to take a little rest before continue their journey. When

Sam took out the lambas bread and share with Frodo, the leit

motive of Shire and friendship, which was used and heard in Lord

of the ring, I appeared here again. The music reminds the audience

they were back in their homeland, Shire.

Apart from Lord of the Ring II, in Crouching Tigers and Hidden

music create atmosphere for film, parallel the scene, giving out a

more dimension of the scene. For example, in the scene when Jen

Sword, instead of orchestral music that was usually used in

western movie, the director used percussion as the background

music, as the fight went on, the intensity, tempo and the volume

of the Chinese drum increased. The texture of the drum changed

from monophonic to polyphonic, the number of drums also

increased, giving out layers of drum sound. Making the

with the more intense drumbeat.

However, music can also plays against the action of the film. In the

scene when Li Mui Ba fought with Jen, giving Jen a lesson about

life, about the philosophy of Wudong, instead of the drum beat

sound used in the scene mentioned above, the background music

bass with length notes, generating a soft feelings. This sweet

disciple, the will to offer his lessons to her.

In view of the above, music and film must be put together, and film

music is not just a single part of it. With music, the emotion of the

audience is intensified; audience understands and feels much

more from the film. It becomes more realistic. The inner meaning

of scenes is conveyed more clearly and efficiently. Music replaces

words, dialogues and even adds double meaning to the scene. New

power; it depicts time and space, adding artistic value to film. The

music. With all the important function of music, it is not just a

single part of a much more elaborate whole, it is actually 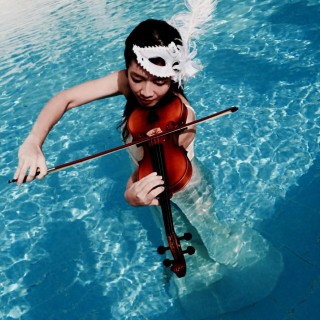